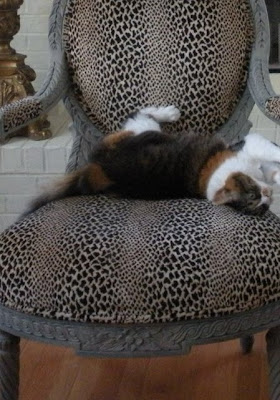 Shenanigan in her favorite chair.
I have been busy trying to accomplish the goals I set for this summer, specifically the gardens.
Yet another tragic event stopped me in my path and reminded me that I am right here, right now and that the future is not as important as the present.
My darling, beloved Shenanigan kitty passed this week.  I was forced to make an utterly dreadful decision, a decision I will regret for eternity.
I brought Shenanigan to the vet this Tuesday, believing she had a bad tooth and that she would be better once the vet corrected the problem.  When he examined her he told me it was not a bad tooth but a jawbone tumor.  I didn't grasp it at first but then the tears came.  His face told me what I needed to know.  He suggested we take an xray so I waited outside, sobbing.  I tried to call my husband but he wasn't answering his phone.
After ten minutes I went back in.  The vet summoned me.  He showed me the xray images of Shenanigan's jaw. The tumor was aggressive and cruel.  My beautiful angel was suffering.  The past few weeks flashed before me.  Shenanigan had been suffering and in my haste to finish my projects I had not noticed the depth of it.
I should have sung to her more.  I should have allowed her to eat the junk food that she so loved.  I should have brought her out to the garden and let her wander under my supervision more often. When was the last time I sang her song to her? Two weeks?  One week? Oh God!  I need more time to show her I love her!
Again, my trusted veterinarian looked at me .  "She's suffering", he said.
"Now?"  I asked?
He shook his head.
"May I hold her?"
She was still under the effects of the sedative and they gingerly handed her to me.
I wanted to scream and cry and throw a fit but I held her and I told her over and over how much I love her.  How she made my world a better place. I cried so much her fur was saturated with tears.  Then I felt her heart stop.  Just like that.  My beautiful, beloved Shenanigan was gone.
I don't know if she heard me.  Her last hour in this world was filled with fear and pain.  I wish I could get her back.  I know that's selfish but I want her here with me.  I wasn't prepared to say goodbye.

I remember the first time I saw Shenanigan.  It was 10 O'Clock at night and she ran past the door of our townhome.  I ran after her.  "Kitty, kitty!"  I crooned.
She disappeared.
I put food out but I didn't see her again.
Two weeks later my husband and daughter were walking home from the local park.  Unbeknownst to them they had a tagalong!  The fluffy kitty that I had seen two weeks before!  She was so thin you could see her ribs!
"Go! Go into the house!" I whisper yelled to my husband.
I swept up the kitty and walked her around to the garage.  As I opened the automatic door she clawed and scratched her way out of my grasp.  The sound of the door had frightened her!
I ran as quickly as I could into the house and grabbed a tin of cat food.  I ran back out and scanned the driveway.  She was still there.
"Don't be afraid, kitty.  I won't hurt you".
She came back and ate the food.
I brought her into the guest bath and she stayed there for weeks, leaving occasionally to go to the vet.  I was concerned that she would never become part of the family.  She was so shy.
I sang to her daily.  She even has her own song.  I am ashamed to say I didn't sing her song to her at the vet because the staff was watching and I was embarrassed.  That song gave her so much peace.  Instant "rumblies"!  Rumblies is the word Gracie coined for cat purrs.
Shenanigan eventually overcame her shyness.  She slept with my husband every day (he works nights).  Though my husband claimed he "hated" cats he would gently lift the blanket when she jumped on the bed and wait for her to settle on his chest.  Eight hours later they would wake up together and come downstairs for breakfast.

I miss you, Shenanigan.

Here are the words to her song...