Before, After, After-After and a Surprise! 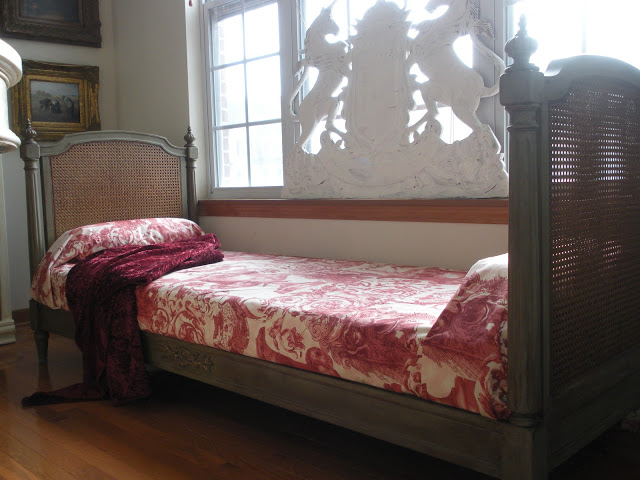 When I finished the daybed last week I painted the unicorn crest that I found on Craigslist (for $25)  and I told you I was going to finish it that night...blogging tends to keep me motivated to finish tasks I have begun.  I know I'm being watched!  LOL! 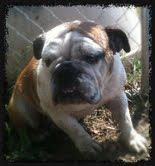 Meet Tallulah!  I recieved an urgent email from the rescue who adopted our beloved Wilberforce to us.   They had a one year old English Bulldog who was adopted but it was not working out.  She didn't have a home.  Further, she would have to be transported back to St. Louis and placed in a kennel or a foster until they could find an adopter.   Four hours away.  She had already been through so much. Tallulah (formerly Dolly) had come from a breeder.   At her tender age, she had already had a litter.  Her caesarean section had become infected and herniated.  She stayed in that condition for months!  The breeder brought her in to the rescue, where funds were quickly raised for her surgery.  That was September.  She has been recuperating.  The couple that adopted her really do love her but he just had some serious back surgery, which precluded him from being able to lift the stubborn determined little angel.
I have another Christmas stocking to make!
I will post photos of her at home.  The photo, above, is from the rescue.
She and Grace are quite taken with each other but my handsome husband is really her favorite human!

Last night, I took the opportunity to sand the crest.  The first photo is the Craigslist photo, second is my inspiration photo and the third is what it looks like now.  The last photo was taken at night. 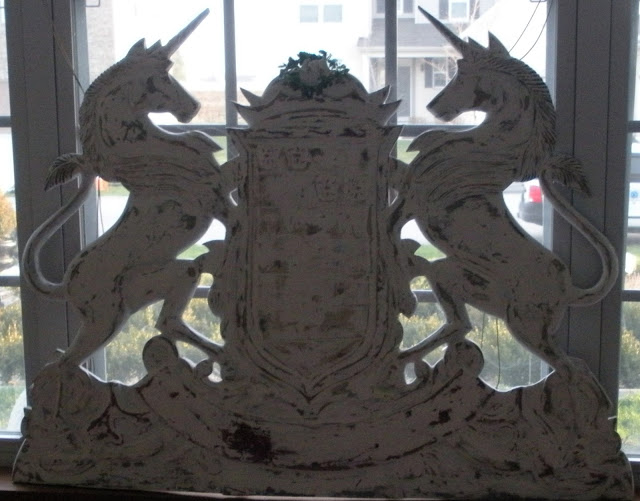 Here is a photo taken in the daytime.  Since I have it in the window, the details are washed out. I have, since then, added and subtracted paint.  For the life of me, I could not figure out how to get the look of the inspiration crest.  The paint is obviously flaked and not abraded.  I think that applying tape over the paint while it is slightly damp, then pulling up would do the trick.  I actually lose sleep over this stuff! 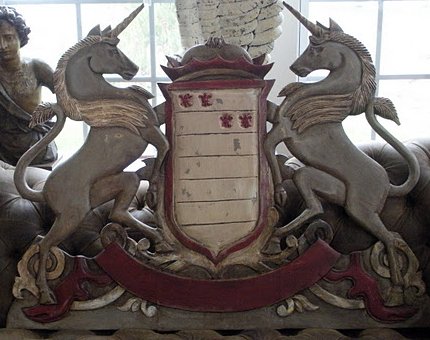 Another incarnation, previous to the white.  Pretty, but not what I wanted.

Painting is a form of therapy for me.  Now you understand why I paint everything I see!
I try not to think too much about the economic state of our country (and the world) or about all the furry faces that need homes, or suffering, in general, while I paint.  Annie Sloan is cheaper than a psychiatrist.

I am participating in Shades of Amber, Quite Simply, Beautiful Things