Louis Sullivan and My Lions


“Whether it be the sweeping eagle in his flight, or the open apple-blossom, the toiling work-horse, the blithe swan, the branching oak, the winding stream at its base, the drifting clouds, over all the coursing sun, form ever follows function, and this is the law.”
~ Louis Sullivan. 1896.


Louis Henri Sullivan was born on September 3, 1856 in Boston, Massachusetts.
His firm, Adler & Sullivan, designed over 180 buildings during its existence, primarily residential, and office buildings. Also included were theaters and auditoriums along with a few burial vaults for the very rich. Among the most notable are the Auditorium Building, where Sullivan would keep his office for 29 years, the Stock Exchange Building and the Schiller Building in Chicago, the Wainwright Building in St. Louis, Missouri, the Guaranty Building in Buffalo, New York and the Transportation Building for the World Columbian Exposition held in Chicago in 1893.
He was a mentor of Frank Lloyd Wright, who called him Lieber Meister, (beloved master).
It was under the inspirational and philosophical leadership of Sullivan that Wright and his contemporaries formed the basis of the Prairie School of Architecture. His philosophy that "form follows function" became one of the basic principles practiced by the Prairie School architects.
After the turn of the century his practice consisted mainly of small banks and commercial buildings throughout the Midwest. 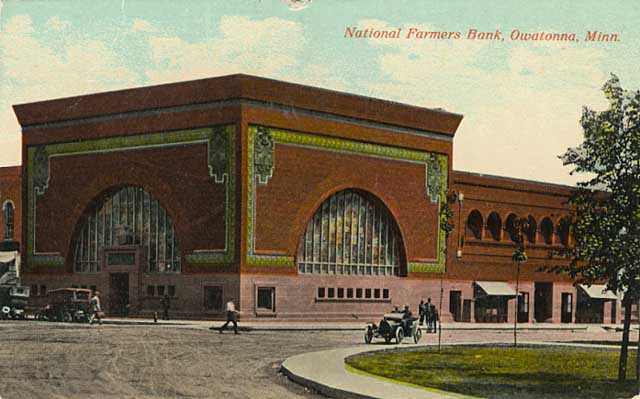 His crown jewel of this period was the National Farmers’ Bank in Owatonna, Minnesota, completed in 1908.

This Summer, we hired contractors to pour stamped concrete in our gardens. 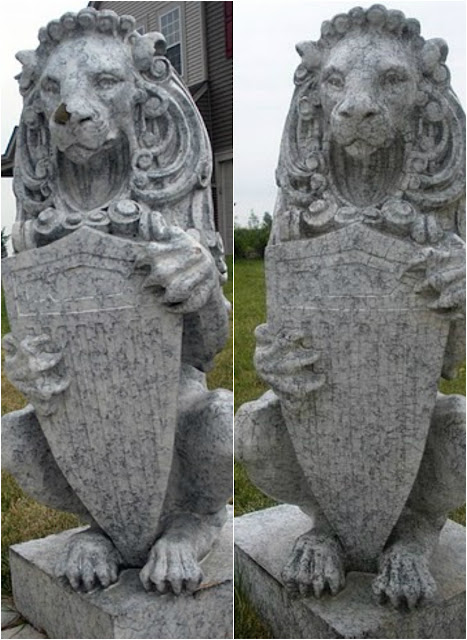 I wanted them to pour foundations for plinths for the glazed terra cotta heraldic lions roof ornaments I found on Craigslist last year.
They were listed as stone lions but they are actually glazed terra cotta. They are salvage pieces, as indicated by their bases, which were slightly chipped when removed.  They are almost four feet tall!  ...and yes, I did bring them home in my Toyota Matrix, much to my husband's dismay.  Two strong Polish boys put them in my car.  It took my husband, my neighbor, his adult son and three of his friends to get them out of my car!
I wasn't sure how to place them so I googled images of lions flanking driveways. 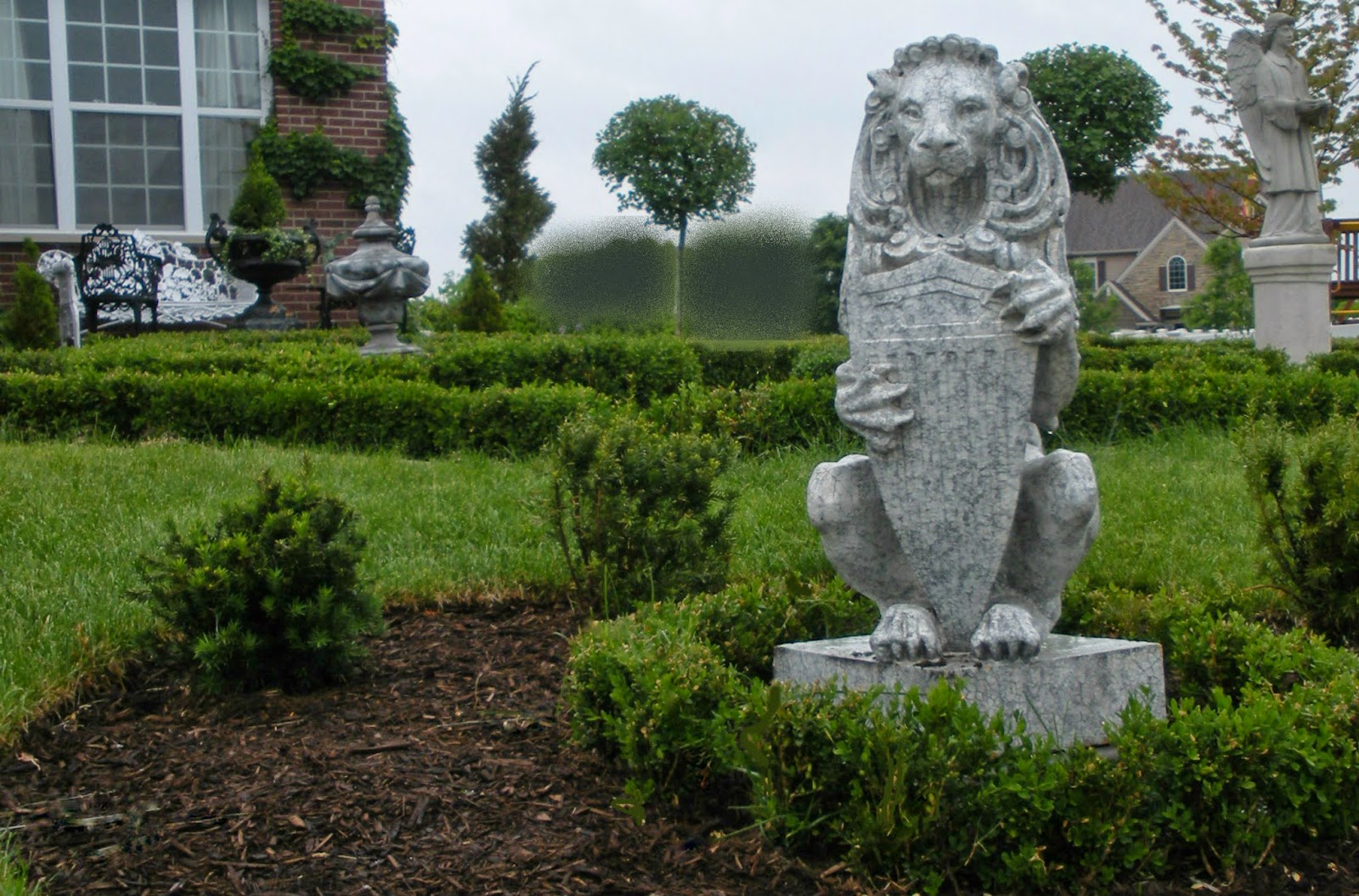 Here is what I found when I googled  the term "terra cotta lion"... 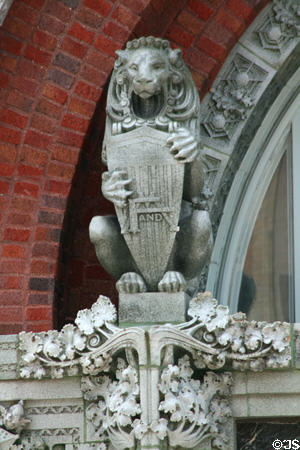 Can you see where I am going with this post now? 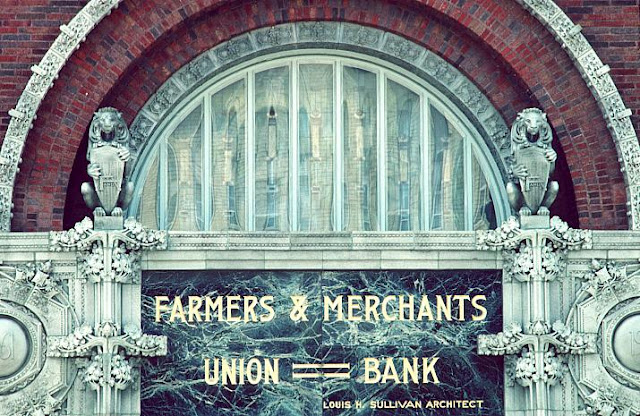 This building is in Columbus Wisconsin.  It is one of Louis Sullivan's "Jewel Box Banks", which are among the most treasured pieces of historic architecture in the United States.

This midwestern bank building, like the People's Savings and Loan Association Bank in Sidney Ohio, was one of the few commissions Sullivan had in his difficult later years. This small two-story bank of reddish brown brick has Sullivan's characteristic terra cotta ornamental trim.

I came across an artist attempting to duplicate Sullivan's work but he was frustrated because there really are no guidelines. He claimed that Sullivan's work was difficult to reproduce. 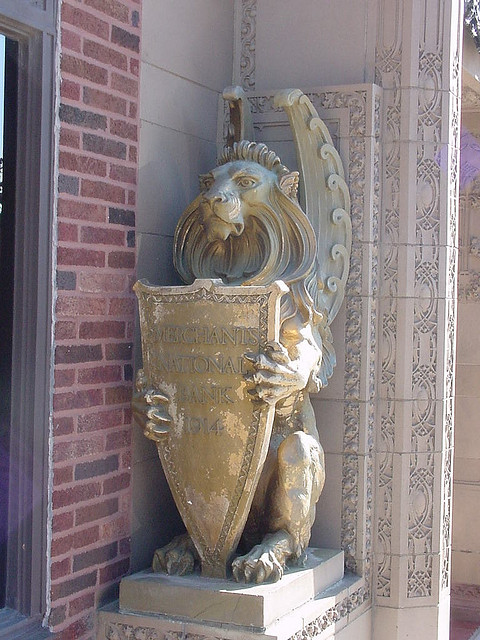 Another Louis Sullivan lion from the Merchant's National Bank in Grinell, Iowa. This one has wings! 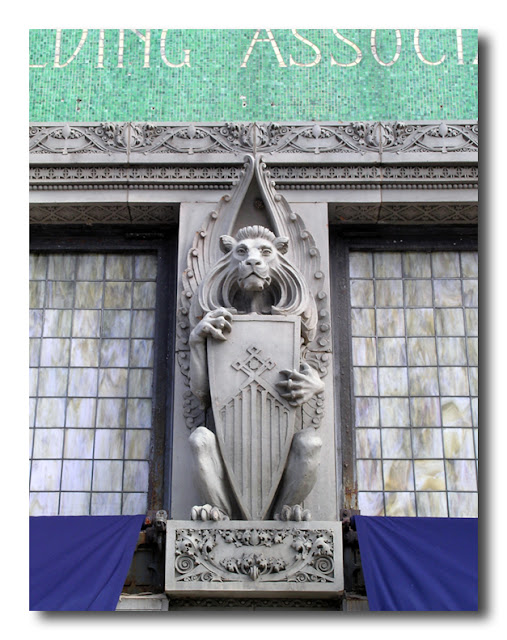 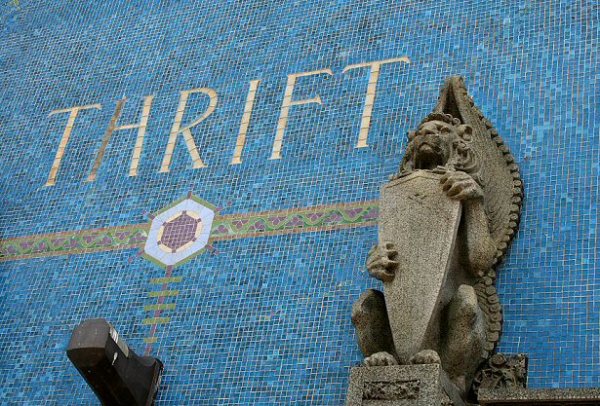 Here are some really wonderful photos of Louis Sullivan Architecture, along with a plethora of information and literature.

Are my lions Louis Sullivan originals?  I'll never know.  It doesn't matter, I loved them the moment I laid eyes on them!  One has a slightly damaged nose.  Did you notice?

I think it gives him character but my husband would like to see me repair it.

For now, they rest on concrete bases on each side of our driveway, encircled by boxwoods.  The plinths have not yet arrived.  Soon.  Then I will have photos!

Handsome husband is afraid someone will steal our lions.  I dunno.  They weigh about 400 pounds each, my husband's police patrol car is always parked out front and... 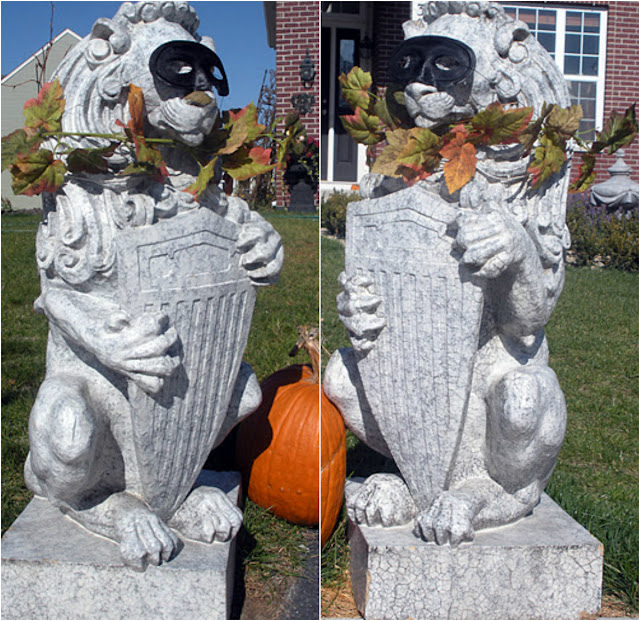 They're in disguise!  Shhhhh...

This was actually their Halloween costume last year!  Tee hee!

I had so much fun researching Louis Sullivan!  I knew very little about this great man, who was so influential in Chicago architecture!

I never did find any photos of lions flanking driveways.  I had to take design matters into my own hands!  Uncharted territory!

Posted by Divine Theatre at 6:30 AM