I haven't been myself lately.  Well, actually somebody else has been me.

My computer was hacked.  My email accounts were hacked.  My ebay, paypal and Amazon accounts were hacked.  Thank the Good Lord they didn't hack my Pinterest!  That would have been the last straw!  For cryin' out loud, though!  Don't people have better things to do with their time than to attempt to steal from random strangers?  If they spent that kind of effort on getting an education or a legitimate job instead of indulging in illicit activities the world may have already had the cure for cancer.  Geesh!  Some of my accounts are gone forever but I think they actually did me a favor in the long run! I never realized how much I depend on my email for things like phone numbers, addresses, passwords to all my accounts!  I do now, however. But I digress...

I still had Craigslist.  Wait until you see...

I have been able to read your blogs but I had not been able to reply since my gmail account was compromised.  I actually got it back then it was hacked again.

Being offline gave me the time I needed to get off my derriere and get some work done outside. 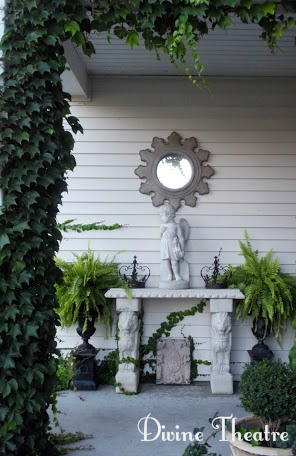 Why, yes!  This is the Aidan Gray Laura Mirror that I found on Craigslist for $30!  I have two!

We have been working on the potager, our formal kitchen garden.  There were myriad challenges associated with that one!  Translation: If you have a bad feeling about your contractor you're probably right.  *sigh*  I have to say that it looks better than I could have imagined!  I couldn't even look at the potager bed for almost a month until I came up with an idea to fix it!  I am much happier than if it had gone my way in the first place!

When I say we, what I really mean is me.   Someone has to go to work to pay for all this.  Handsome Husband worked a lot of overtime this Summer!
Speaking of overtime...the weeds were neverending this year!   I actually used Preen, a pre-emergent that prevents seeds from germinating, in the front parterre.  I hated to do it but I could not keep up with the weeds!  Mr. Toad hopped through the Preen granules when I applied them.  I panicked!  I ran after him and gently washed him off with the hose, then set him in the side gardens.  I was so worried he would suffer adverse effects!  Not Mr. Toad!  He is happily hopping around his parterre domain as I type. I love that little guy.

Unfortunately, it is difficult to photograph our new plantings because our neighborhood is so new, all you see is the neighbor's houses. The plantings need to grow a bit more, I suppose.  I will try to get better photos.  I am really excited to get your feedback! 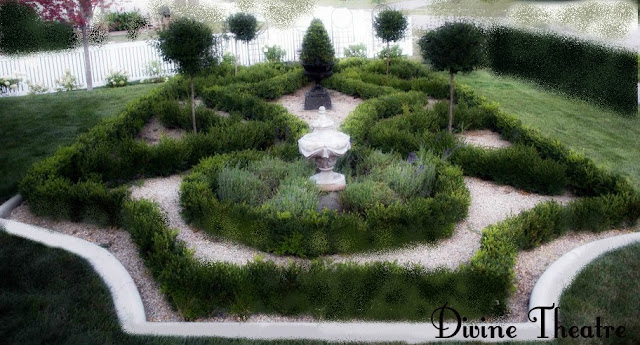 The hedges to the right of the parterre are computer generated. In real life they are only two feet tall and three feet apart!  Also, though my neighbor recently had a new fence installed, it merely highlights their primary colored swingset, enhances it, if you will.  I edited that out too...In time the Limelight hydrangeas will grow to cover the view.

I already harvested the first crop of lavender from the circular beds.  The second crop will be ready in September.  The Lilac Standards were Handsome Husband's Mother's Day Gift to me!  The Autumn Blaze Maple in the left rear was my Birthday gift to him.  The leaves stayed red since it was planted in Spring.
Remember when the parterre was just a baby!?  *sniffle*  Look how much it has grown!  I trimmed it for the first time this Summer!  First haircut!  *sniffle* *sniffle*

Tomorrow, I will rearrange the boxwood surrounding each lilac standard.  The linear shape is a distraction.  I am shaping them into curliques!

It's good to be back among my Blog friends!  I have missed you!