"If to be feelingly alive to the sufferings of my fellow-creatures is to be a fanatic, I am one of the most incurable fanatics ever permitted to be at large."
~William Wilberforce

I cannot recall how his photo crossed my path initially but I fell in love with him that very moment.

The rescue organization, Ruby In the Ruff, was calling the little fellow "Bubbi".  He was listed as 11 years old. He had spent his entire life as a breeding stud in a puppy mill.  A commodity.  He was no longer of use to the breeders so they threw him away.

I hesitated to send an email because English Bulldogs are considered "old" at the age of 7.  I knew my heart would be broken sooner rather than later, when he passed.

I could NOT get that beautiful face out of my mind, however.

I sent an email with my heart in my throat.  What if he was already taken?  By now, he was MINE!
Two days passed with no response.
I sent another email.  They had not received my first.  He WAS available!  I wasted no time in convincing my handsome husband that adopting Wilber was his idea (and a brilliant idea at that)!
I scrambled to fill out all the paperwork, hoping I was good enough. The rescue accepted our application!
He needed a proper English name.  We decided to name him Wilberforce, after William Wilberforce, the youngest member of British Parliament.  Wilberforce was instrumental in ending England's slave trade.  A staunch animal advocate, he was also a founder of the world's oldest anti-cruelty society.
The movie, Amazing Grace, was written about his life.  A beautiful movie, if you have not yet seen it. 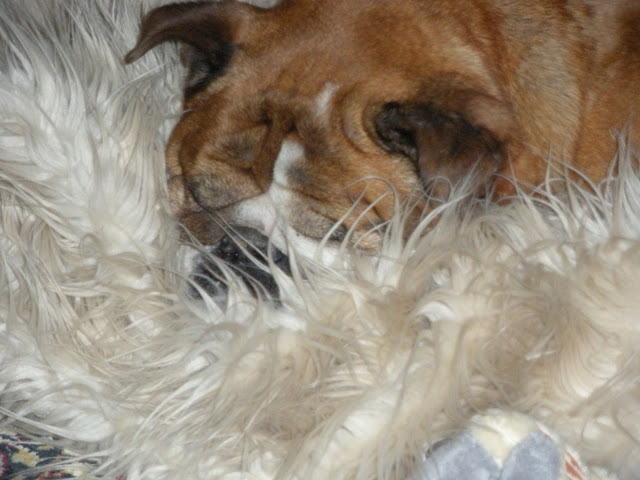 The trip from St. Louis to Chicago, via transporters from Grahamville Rescue, was an exhausting experience for the little man.  I gave him our best blanket.  He slept for hours!

Wilber had been "fixed" right before his adventure.  At 11 years old, it was no small deal.  He had been missing an eye, no one knows what happened.  His ears had been infected so many times they were DEEPLY scarred.  He had earmites and intestinal worms.  He had small wounds all over his body, from the other dogs biting him, that had become infected. The flesh on his nose was so dry, it must have been extremely painful. I left my veterinarian's office with myriad medications, along with special cleaners for his skin folds and ears.
Turns out, it didn't matter what we called him because he could not hear a thing.  Still, when I sang to him, I would press my lips to his head and call him Wilber. He would make a funny growling-purring sound when I did that.  He also made that sound when I scratched his neck.  I made it a point to hear that sound as often as I could. 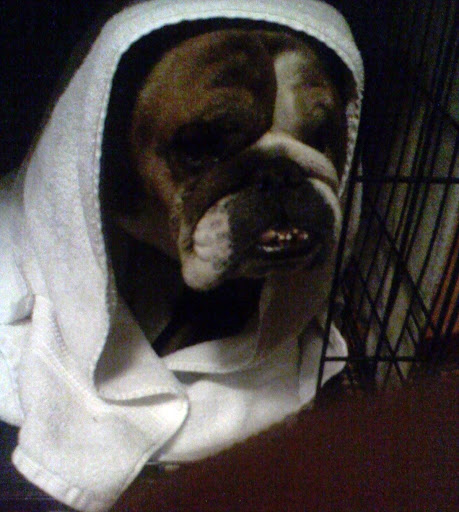 Wilber chose to spend the majority of his time in his crate.  It's what he knew.  He was not potty trained so I brought him clean towels night and day.  I always loved the look on his face when I put a towel, fresh from the dryer, scented with lavender, over his head.

He had spent the majority of his life in a cage. In a cage.
It took a short while for us to learn to communicate with each other.  I would make big, sweeping hand gestures to get his attention.  He followed me everywhere I went...except upstairs.  He was just unable to make it.  At night, I would wake up several times to come and snuggle him.
One night, my husband noticed I had been gone a while and came to look for me.  I was outside with Wilber.  For almost an hour Wilber had just stood in the garden, staring.  I told my husband that he had not had this opportunity...to just be. To enjoy the night.  I wanted to give him that; To be loved and respected and doted upon. Wilber never barked.  Often, when we raised our hand to scratch behind his ears, he flinched.  Towards the end he realized that human hands are not always bad.  I loved to shower his head with kisses. He loved it too.  I miss that the most tonight. 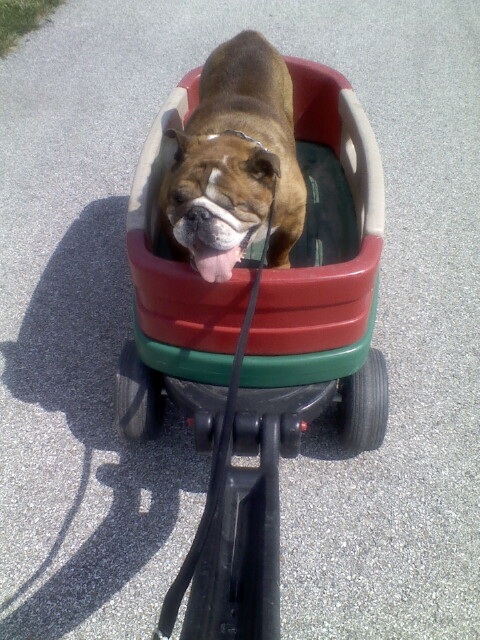 Wilber was very famous among the neighborhood kids.   He adored them, as well.  Everything about them.  In return, he received more snuggles and giggles than he had probably seen in a lifetime.  Ten kids, waiting their turn to pet him.  It is a picture I will carry in my heart forever.

There are not too many photos of Wilber, not only because his time with us was so brief but because every time I stood in front of him to take a photo he would come running to me.  By the time the shutter clicked, all I had was the tip of an ear or a foot or the wall behind him!  I truly believe he loved me as much as I loved him.

Upon his last night on this earth, Wilber was brave to the end.  It was only 10 minutes between recognizing he was in trouble and his meeting with the Lord.  I laid with him in his crate and I sang to him. He made that familiar growling purring sound, he looked right at me with a love I have never known and then...he died. He was at peace.  Now, my grief begins.

I realized something upon my dear Wilber's passing; if I were to die no one would know what my beloved pets were like.  The things they loved, favorite blankies, how they behaved when they were ill, what they liked to eat, where they liked to be pet, etc.  Only me.  I decided to write it all down and I urge you to do so too. Every last detail you can muster.  You are their voice.

I don't now if I would have recognized any symptoms with regard to Wilber's health, or Frannie's health, Shenanigan's, Duchess' or Jenny's.  I do know that knowing their histories would have helped.  It would also have helped to make them more comfortable in their final days.

Wilber also spent a great deal of time in the front boxwood garden.  I joked that it really wasn't a proper English garden unless it had bulldog piddle in it.  That is where we will spread his ashes.  He would have liked that, I think.