I mentioned my darling Daniel several posts ago.  We met on a rescue transport this Summer.  (A rescue transport is a system wherein people volunteer to bring animals to safety by virtue of a series of relays.  For example, a shelter in New Orleans find rescues or adopters in Wisconsin. The volunteers take turns driving the animals 50 to 100 miles at a time until they arrive at their destination.)  The rescue did not have a home for him but they did have a wonderful individual named Nancy who was willing to pay for his veterinary care on the North Side of Chicago.  My job was to bring him to the veterinarian's office.
I peered into his crate. He looked like an old, dirty rag. He was  frightened and tried to make himself look very small. The poor, frail little guy was abandoned by his owner at the age of 14!
The vet's office was closed so I brought the kitty home with me.  He was covered in fleas and so very dirty!  I gave him two showers and, though he did not enjoy them, I could tell he was relieved.  The owner did not tell the shelter what the kitty's name was.  I just called him "Kitty".
Evidently, the fleas had been living under his matted fur for a very long time.  His neck was red and bloody.  He drank so much water that I could hardly keep up with the demand. He would attempt to dip his entire head in the bowl!  The trip was arduous for him, eight hours in the back of a horse trailer, his crate shaking violently the whole time, piled next to frightened, barking dogs of every kind and kitties, like himself. Can you imagine?
I brought him to the vet the next day. He stayed there for ten days total. They diagnosed many physical problems, including dehydration, ear infections, eye infections, hyperthyroidism, and sadly, FIV;  The feline equivalent of HIV in humans.
Nancy had many other pets but was willing to take him, bless her soul.

I decided I needed him.  I named him Daniel, after Daniel of the Lion's Den fame and after my dear brother, who is one of my biggest heroes. 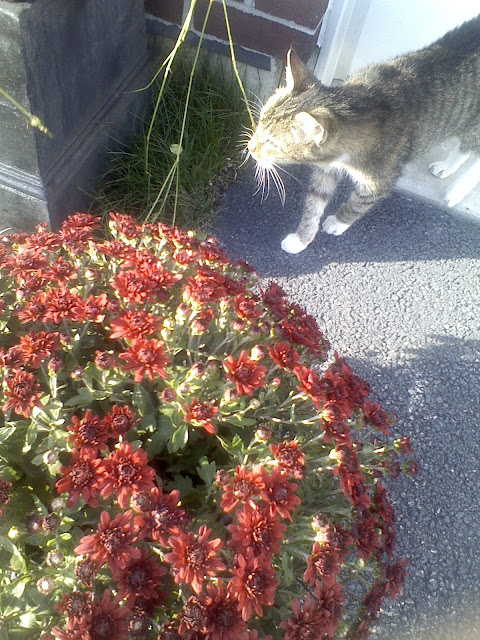 Daniel spends much of his time in the upstairs bathroom.  He cannot come into contact with the other cats, for there is no vaccine for FIV and no cure.   I bring him outdoors when the weather allows, supervised, of course (every step of the way)! 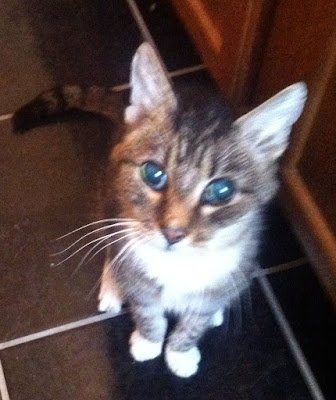 Here is Daniel today!  How he brightens my world!  He eats four to five cans of food a day!  He has put on a great deal of weight and shows no signs of being sick!

To the person who left Daniel at the shelter,

I do not know the reasons you left him, nor do I understand why he was in such poor condition.  All I know is that I thank God every day for Daniel!  He is such a happy little man, content with nothing more than  a soft, clean bed, food and love.  He loves classical music, especially Mozart.  He lays sideways when you pick him up so he can look at your face, he can stay that way for hours.  I am so GRATEFUL he is here.  He is loved and he is safe.  Thank you for Daniel!  I could NOT imagine my life without him.

I am linking to the Dedicated House, Make It Pretty Monday

Posted by Divine Theatre at 9:55 AM