We didn't accomplish much yesterday with regard to digging holes for the Blue Spruce trees. We have all been overcome by the flu!  No hurry, anyhow.  They are still in the ground in their original location.  I am so grateful to have found twenty-one, five foot trees on Craigslist!  At $150 that is a bit over $7 per tree!  With that kind of savings I can hire the ginormous man who helped out last year! (Found him on Craigslist!)
I don't like the plastic fences our association allows so I opt for no fence.  I will plant dense trees at the perimeter of the yard and fill in the rest as detailed in a previous post.

I decided to open more boxes that have been our garage since the move.  Before that, the boxes were in storage.  Many had never been opened.  I had marked the contents, but three years later I had only a vague recollection of the contents!
Here are some of my long forgotten discoveries... 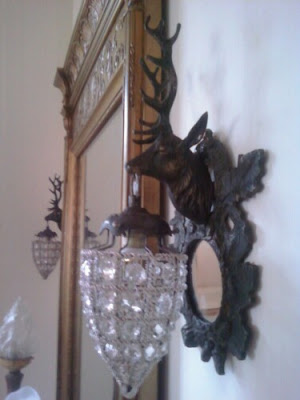 This pair of elk chandelier sconces. Totally forgot about them! 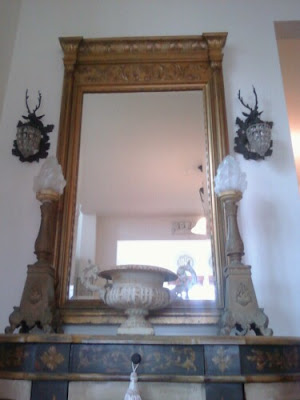 This pair of Empire bronze torch lamps. I have utterly zero recollection of ordering them! 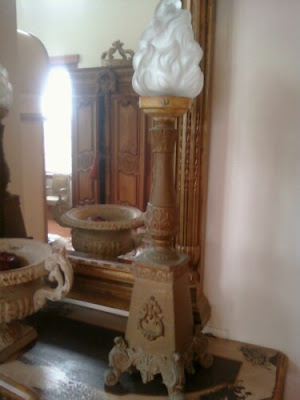 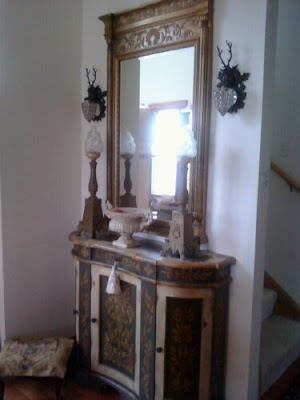 Alternate angle.  I am in the midst of reupholstering the French stool with an antique tapestry fragment... 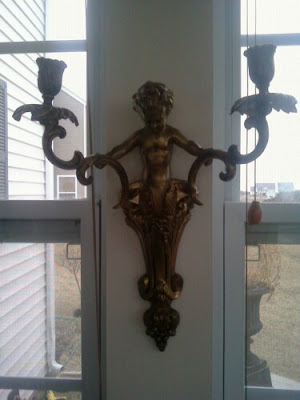 I had actually been looking for this pair of brass putti candle sconces.  I finally found them!  They are in the sunroom for now. 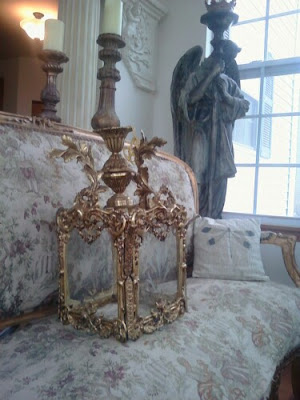 I also found this pendant.  I forgot about this too! It must be made of Dwarf Star material because it weighs a ton! It is about two feet tall and solid! 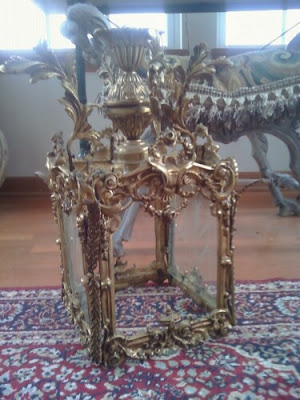 It might look nice in the breakfast room.  I like it in the sunroom too, but I think I will use the hot air balloon chandelier I bought on Craigslist. I dunno. It is very large...hmm...perhaps the stairwell?
I also found an Empire elk crystal chandelier.  I think it will go in the library.
Oh! Seven Moravian Star light fixtures for the hallways... 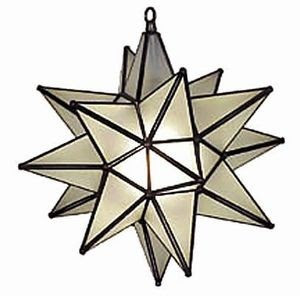 I did remember I had these! 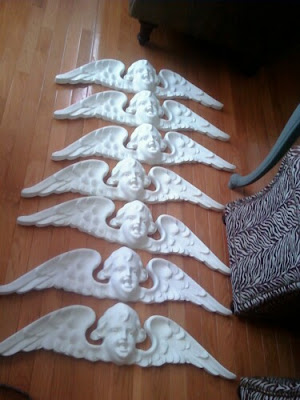 Seven, three foot long custom made carousel cherubs!  Wait 'til you see what I am doing with these! They are made from an actual cast of an antique carousel! 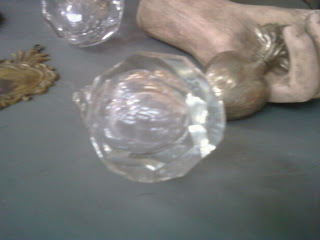 Bags and boxes of chandelier crystals...some as big as my hand! 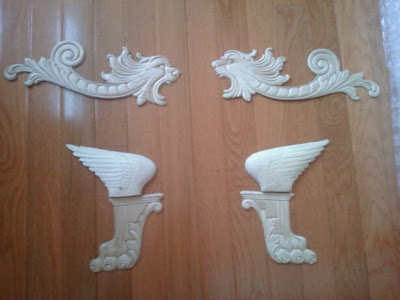 I finally found them!  Wood appliques for Gracie's daybed!  This is gonna be so cool! 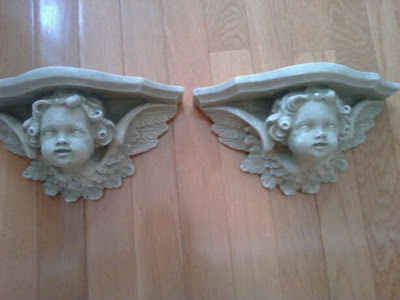 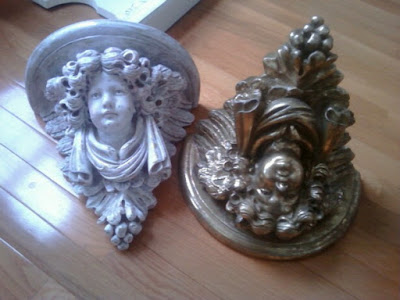 Lots and lots of cherub corbels! 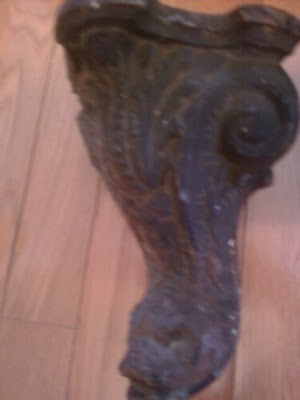 Four cast iron dolphin tub feet.  After I drill holes in the mouths and mount them on a post fitted with copper pipe they will make a lovely fountain! 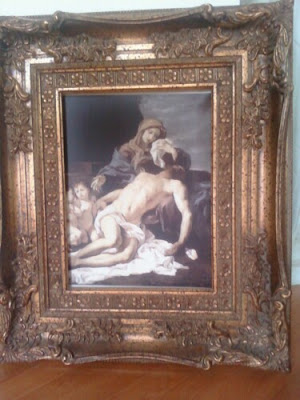 Elaborate gilded frames for my paintings!   This one is about 3 ft tall! I have boxes and boxes of frames! I am so excited! 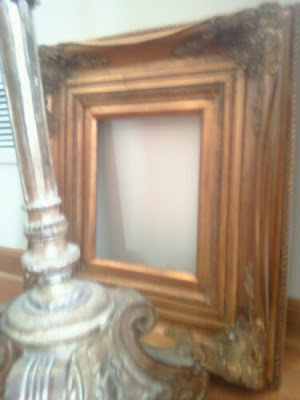 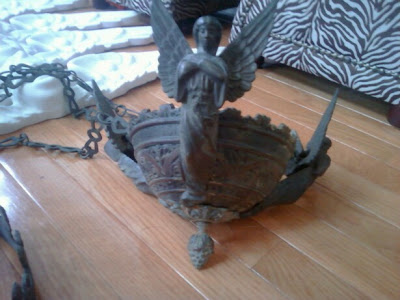 This light once illuminated a church altar in England! 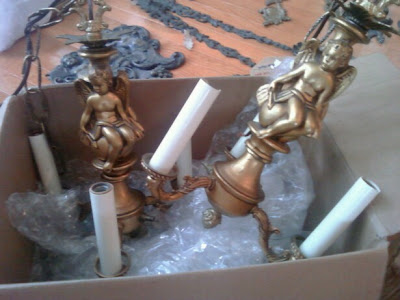 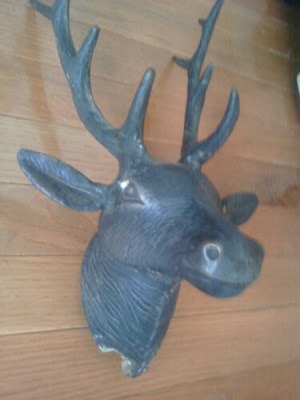 I don't remember this one either, but it would make a nice coat rack!
There are so many more treasures to behold but I have to get the boxes out before the trash man comes!
I know you are curious as to how I could have forgotten about all this...so I'll tell you!
When Gracie was just 9 months old I went to the store to buy teething medicine.  I rarely go anywhere without her, but she was feeling so poorly I went alone and left her with Daddy at home.
As I exited the grocery store I was struck by a car.  Subsequently I had many injuries which required surgery.  Lots of pain medication too.  The surgeries went on for several years, at which point I decided I had had enough!  The years following the accident are a blur, it's nice to know that even in my drugged state I still had excellent taste, as evidenced by the treasures you see here!  LOL
Seriously, I now practice yoga and do without pills of any kind.  I would rather endure a bit of pain and remember each moment of my child's life.
If Gracie had been with me that day she would have been gravely injured.  The side the car struck me on is where I carry her.
I count my blessings every day!
Now you know! 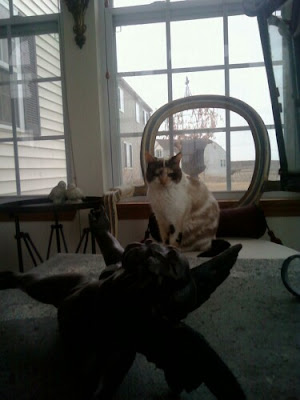 My beloved Faerie Princess was helping me with inventory!
I am linking with Happy to Design, Sunday Favorites!  Thank you for the opportunity!
Posted by Divine Theatre at 11:18 AM