Hey! That's Not What You're Supposed to Be Doing!

It all began with the secretary.
I think so, anyway.
I was supposed to be finishing up.
I painted it again.  This time Annie Sloan French Linen.

I walked into the house after taking the dogs for their daily sashay and I looked at the Library, just to the right of the entrance
.
That's when it happened!

Something was not right. 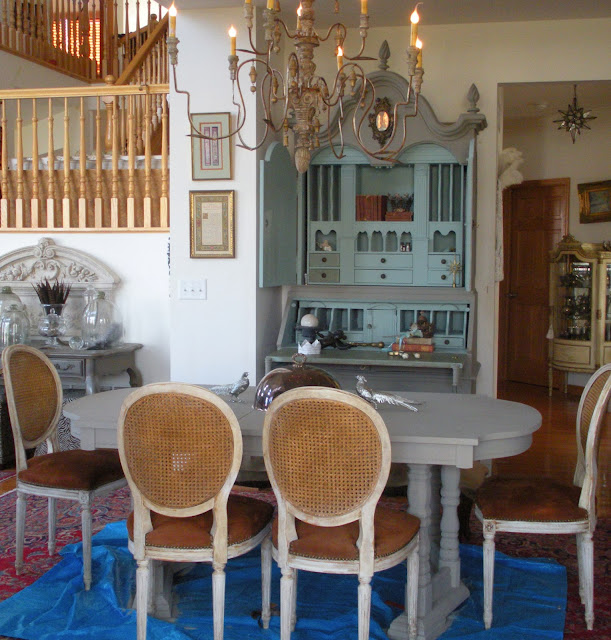 I applied Dark Wax to two of the drawers of the secretary, as well as the front of the desk part thingy that folds out.  It does look better antiqued, I decided.

Since the secretary now has a Gustavian feel to it, I decided to study Tara Shaw's designs.  Armed with images of her work I headed to Craigslist.

I found the above table less than five miles from my home for TEN DOLLARS!
I bought grey paint at the Home Depot on the way home.
I'm trying something different.  No Annie Sloan this time!

I am still painting it, hence the tarp.  I bet you thought the tarp was there because we are messy eaters?!
Well, that too.

The chandelier needs to be lowered.
*nods to self* 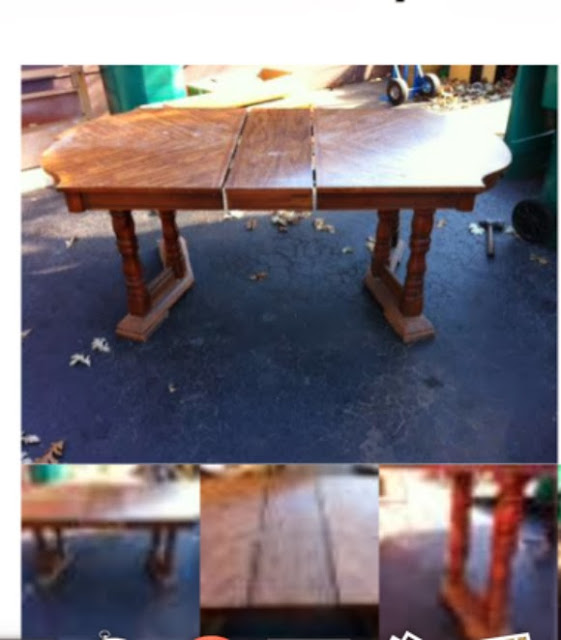 This is the original Craigslist posting.

The Breakfast Room table didn't really work in the Library so I dragged it back through the house and into the Sunroom.

Then, of course, I rearranged the Sunroom. 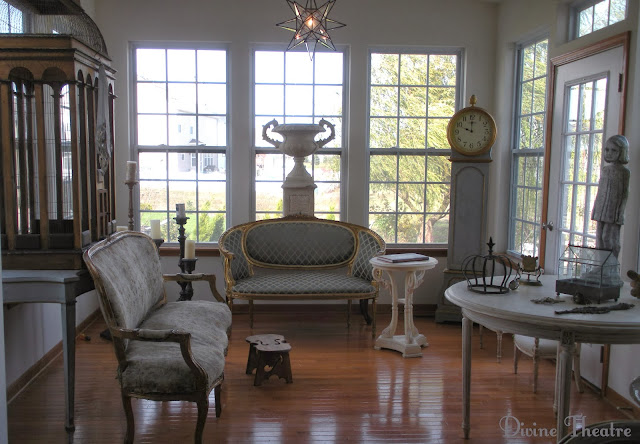 I sold the iron Campaign bed that was in there.  Then I dragged a French settee from the Music room...you get the story.
I also removed the lace curtain balloon panels.
They are on Craigslist if you want them! 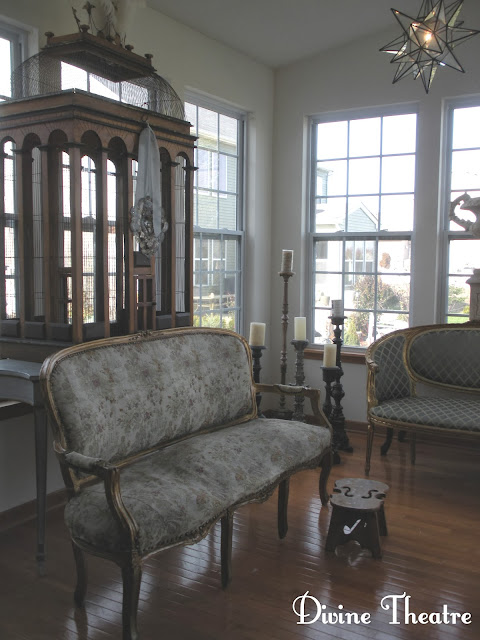 It's a sunny day here and the room is all windows...yet it's dark.  Go figure!?
The arborvitaes and the fruit trees in the backyard will soon be tall enough to block the neighbors homes.
I cannot find a window treatment I like so I will try to be patient. 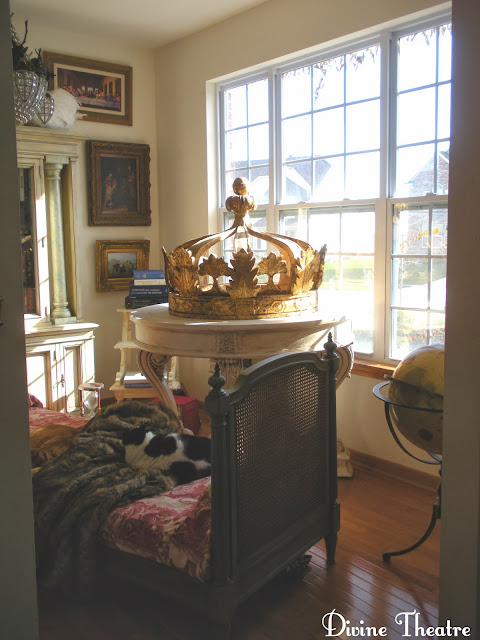 Then I dragged the ginormous, heavy library table back into the Library and removed the post from Craigslist.

I like it here again!  The bed crown fits perfectly!

I decided I need to paint the bibliotheque grey. 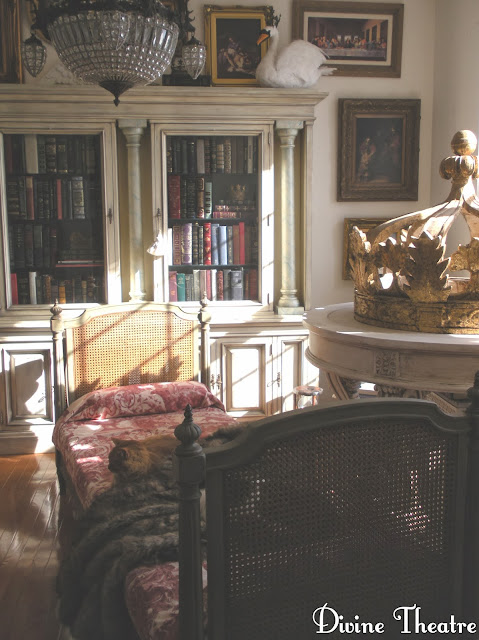 Instead of the table being centered in the room, it is in the window.  The daybed is under the chandelier.  This forms such a lovely conversation area!
With the table in the center of the room, you could not see the people sitting on either side. 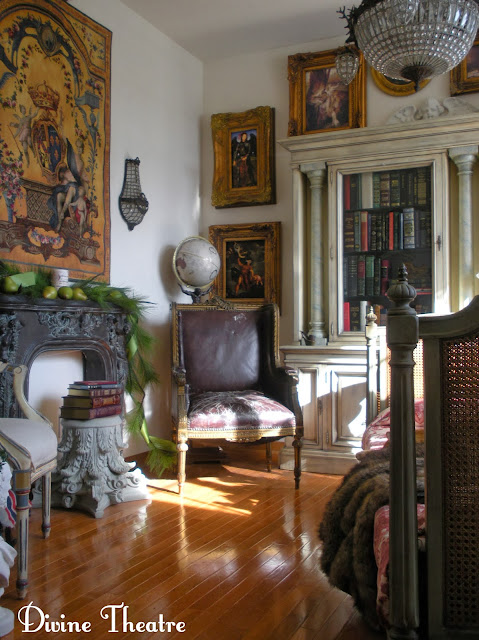 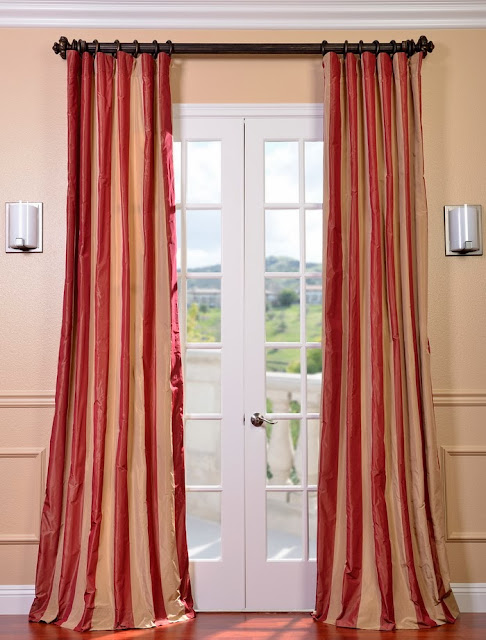 I finally chose drapes for the Library!
Aren't they beautiful?  I just ordered them from Half Price Drapes!
The impetus for this is the crown.
Why?
Well, because it's in the front window of the house and I am worried that it has a leg lamp vibe.  You know which one I am talking about?  From a Christmas Story?
Right.
I'd like to be a bit more subtle.
Just a bit.

So, to recap, I have not finished the secretary, nor will I do so today.  I am upholstering the new bench that I bought (on Craigslist) to go with the new table.
Probably not tomorrow, either.
I am painting the bibliotheque.
Saturday?
Maybe.

Am I the only one who flits around my home, rearranging everything like a crack-addled butterfly?